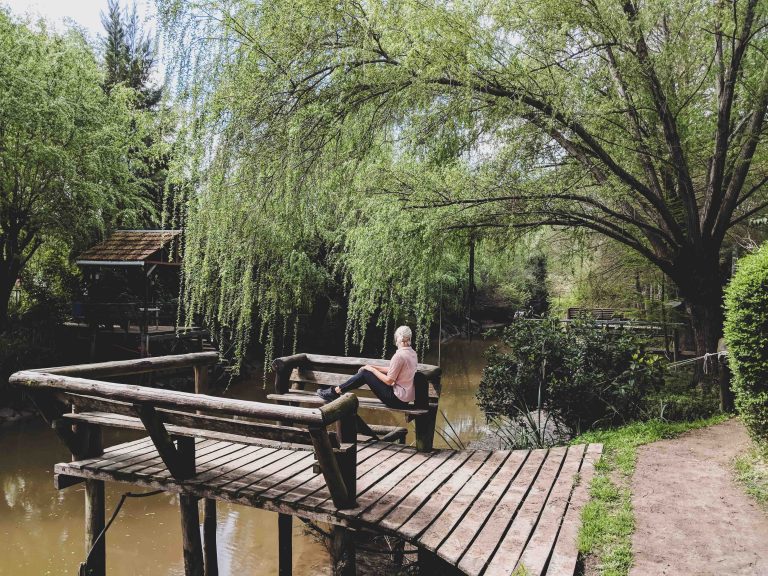 We’ve been quite busy running around a lot, so I’m a bit behind on what we’ve been up to. We’ve just got back into Argentina after a four-day trip to Uruguay. Those four days in the South American country with the highest standard of living are in the backlog though, for now I’m concentrating on where we stayed for a couple of days before we got the ferry across to Uruaguay, on the Parana Delta in a sleepy little town called Tigre. The delta is 300 square kilometre networ of winding streams and canals that take the Rio Plata into the gaping mouth of the Rio de la Plata.

Tigre is a holiday destination for many people in Buenos Aires. To get there we took the local train from Estacio Retiro in the heart of Buenos Aires and it only took us about an hour heading north, even with stopping about 12 times, to get there. The train dropped us off at the centre of Tigre. Once off the train we took a short walk over to the fluvio terminal and took what the locals called la gancha to the island we were staying on in the delta. Like all river deltas, the delta de Tigre has a lot of islands and la gancha is like a kind of boat bus that runs around many of them to a regular schedule. Or at least tries to. It seems to do at least as well as the British trains.

We only decided to come to Tigre because it is where you get the cheapest ferry into Uruguay, but we’re glad we did. We had one full day at our hotel and we spent it gathering thoughts and planning ahead in gorgeous surroundings. At this time of the year we were quite lucky with the weather as the sun shone brightly for our day on the delta, but the air was moist and the ground we walked on was sodden from some unseen prior downpour.

We also managed to do some exploring of our island and the neighbouring island. It is all waterways an dirt paths but it was easy nough getting around as some streams have permeanent little bridges, and some can be jumped. The innkeeper had to lower a mechanical drawbridge to let us off our island though, which was cool. Then, when we returned, we found the innkeeper’s dogs waiting for us at the end of the bridge as it slowly lowered down towards us. As Lindsay likes to say about quite a lot of things, “It was sooooo cute!!!!!” Lindsay has been ensuring that we’ve fostered strong relationships with all of the animals we’ve encountered on our trip so far. Just ask Julieta’s cat back in Buenos Aires.

What we found when were off on our mooch around the islands was truly breathtaking scenery and some of the most interesting houses and buildings we’ve ever seen. Some of the houses looked like they’d been patched together with whatever had washed up on the shores of the river while others wouldn’t have looked out of place in a well-off leafy suburb. All linked by little paths and offshoots of the river. Grander still were the huge beautifully crafted 19th century villas, complete with their own private jetties hidden away behind magnificent iron gates.

The whole place had a feel of Louisiana in the US or some other sodden state in the deep South. The pace of life seemed amicable and all the animals on the delta seemed extremely chilled, which I thought must have been down to the good relationship they with the humans on the islands. I do love a dog that doesn’t bark at me and whose poo I don’t have to pick up.

We hardly had any time there really and much of the delta remains unseen for us, which is a massive shame. We had to pack up and bale from our hotel at half eight the next morning, to catch la gancha back into town where we then had to wait around until half five to catch the ferry onto Montevideo.

As frustrating as that might sound, it was all made alright by the fact that we got to see some old friends while we waited. The mighty Baz and Claz combo and Pete and Rosie McConomy. Pete and Rosie even promised to come and meet us somewhere in Asia after Christmas. You did say you love Vietnam Rosie, so what about the Mekong Delta? We’ll see you there. I’d call that a result then and our days in Tigre well worth it, but we’ll have to stay longer next time.

A few more shots from Tigres