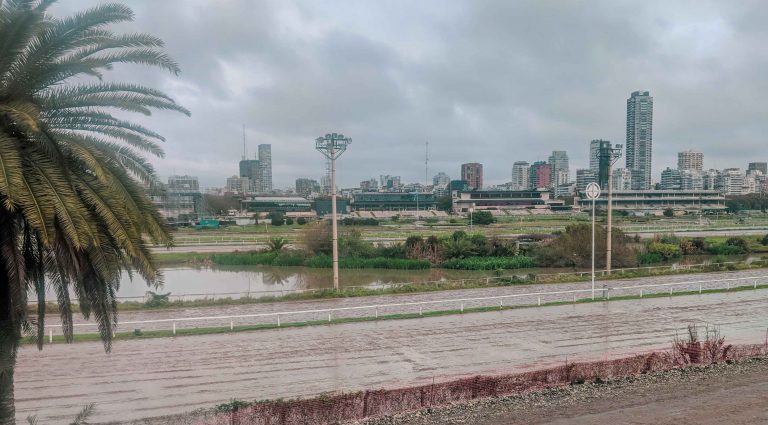 When you step off the plane in Buenos Aires it doesn’t take long before the chaos hits you. You stand in an orderly line, you hand over your passport, the nice man welcomes you to his country, you go through to get your luggage, and then boom. Total chaos.

There are sniffer dogs randomly walking along the baggage reclaim belts, old ladies struggle for non-existent luggage trolleys, and random people are being dragged out of the toilets by security.

At least that was our experience of BA’s Ezeiza international airport.

Chaos reigns outside the airport too.

After five minutes waiting for a taxi a man with an automatic rifle tells us we’re standing in the wrong place. It takes three ordered taxis before we’re picked up and then finally we’re on our way into the city and headed towards to the Rock Hostel where we’ve booked to stay for the first three nights of what might be the trip that defines our lives.

In fairness, we’ve barely prepared for our three days in Argentina’s capital, the Paris of South America. It has always been my plan to feel our way through the continents we’ll be visiting, learning the places we should go from the people we meet on the road rather than in some book or through a Google search. Starting off in one of the world’s great cities only exacerbated the plan I had in my head. We treat the cities themselves as museums and spend our city breaks walking around beautiful or interesting, one usually means the other, neighbourhoods soaking in the city the best way we can. It has worked well so far, so why would we not just do the same in Buenos Aires?

Nothing we could have done though, would have prepared us for The Rock Hostel. It wasn’t the hostel’s fault per say, it just couldn’t have been further from how we wanted to start the trip. I read recently that the average age of backpackers these days is 32 rather than 24, which it was about 8 years ago when last I set off with a pack on my back at the age of 25. Like the average backpacker I’m older now and I’m also travelling with my girlfriend. Neither of us want to sleep in a dorm room that smells of four strangers or share a bathroom and shower with however many other people might be staying in the hostel. We want our own clean space. We are tired from a 14-hour flight and we have nowhere to go to regain our composure than out into the city itself. This can’t go on for another 3 days.

We head out and the tiredness, crankiness, and disappointment are all apparent. I’m struggling to keep a lid on it all, but the chaos of Buenos Aires brings me back. The first time I travelled I was alone, and on the very first day it was other travelers that saved me from the fatigue I felt from the long flight it took to get me there. This time it is Lindsay’s positivity and the city itself that slaps me across the face and forces me to pull myself together. What the hell is going on?

The Rock Hostel sits in an amazing location, right there in Plaza del Congreso at the heart of Buenos Aires. When we come out the door the landscape is filled with flags and the smoke of a hundred barbecues while the air rings with the sound of angry voices belting out of loud speakers. Something is happening. People are not happy, and they’ve shut down this central plaza and the surrounding streets to make sure everybody knows it. The barbecues are just here to feed the indignados.

The craziest thing for us though, is that we can’t buy any food from the grills on the street because we’re caught in a sort of backwards backpacking lingo. Extensive research has found us bank cards that we can use anywhere in the world for free, but the ATM situation here in Argentina is loco. A recent economic crash is hurting the local people bad, hence the scene in front of us, but in response to the crash the banks have ramped up the charges for using an ATM, in some machines it costs more than €10 to make a withdrawal. We find ourselves in a situation where it is cheaper to buy food in local restaurants than it is to buy something off the street. Everything is upside down.

We don’t stumble far before we fall into Americana, a local fast food joint, which has the affectionate tagline The queen of the empanada. As well as the grill, Argentina is all about the oven. Italian influence has brought with it il forno and Spanish influence has brought with it empanadas, little pastry delights filled with all sorts of goodness. You can do much more than just cook a pasty with an oven though and Americana also specialises in Argenitina’s take on pizza. It turns out that thick based crusty pizza topped with ten types of cheese and onion is to me and Lindsay what spinach was to that weird looking sailor, Popeye. A mere €5 worth of complex carbs, spicy meats, eggs, cheese, and olives alongside 50 cents worth of chilled red wine is all we need to get our heads on straight again.

We walk around a bit, see the Obelisco de Buenos Aires, Casa Rosada, and Teatro Colon. We also make a decision. We’ll stay one night in the hostel, but then find ourselves somewhere else to stay for our final two nights in Buenos Aires, before we head on to Tigres. Fortunately, the Paris of South America has plenty to offer and a few things have changed since the last time I went travelling that makes it all much easier to find.