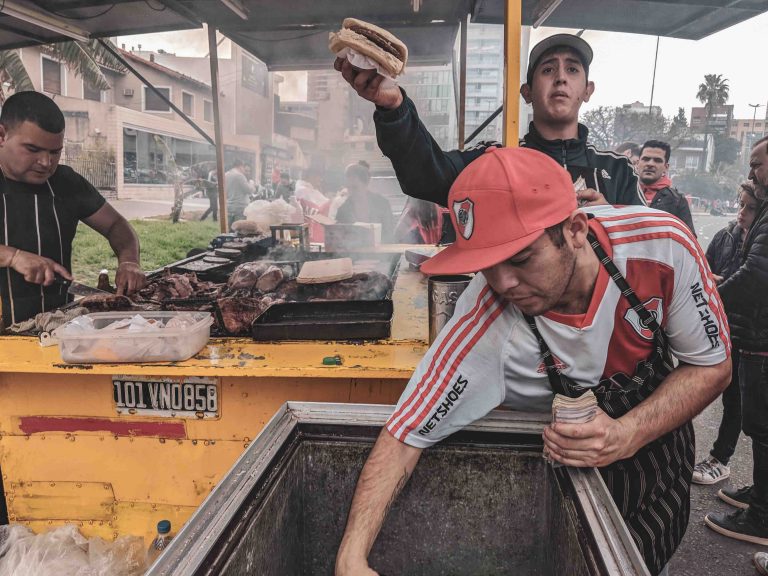 Buenos Aires is a truly magnificent city, it is plain to see. It looks like a tired old town though. From crumbling pavements to makeshift train station platforms there is a lot of work that needs doing if this city is to shine like it should. You notice signs promising the work, but away from the centre not much work is being done. There is much more promise than action.

Despite this seemingly empty promise, Buenos Aires is big and beautiful. Most of all though, it is busy. There is life teeming out of every street, alley, and dark corner you can find here. I think the chaos could stem from the constant motion, but a lot of the people who live here believe the chaos is a result of something else, other people’s mistakes. Bad decisions made by worse politicians have left this city a long way from perfect and with no clear way to start closing the gap.

One thing’s for sure here, the people on the street are not the problem. Porteños, as they call themselves, have a lot to be proud of and even more to be passionate about. Everybody is smiling in Buenos Aires, and happy to help. There are no go areas like la Boca, the neighbourhood where we spent the last two of our three nights in the city, which falls on both sides of edgy. Some parts will show you a colourful flash of what working class life can be like here, but other areas will likely see you lose a phone or a wallet. I’m not going to get into the causes of socio-economic problems here, but I will ask you to consider whether your city has places that tourists shouldn’t gawp around while snapping photos and using expensive gadgets too?

In three days in Buenos Aires we spoke to a lot of Argentinians. Alejandro, a conservationist from just outside of the city, is now on his way north to Peru where he’ll take a job leading hikes for a hostel he visited years ago. His contract here in Argentina was up and there wasn’t another one to replace it. Julieta, our gracious host in La Boca, is a civil servant who finds herself having to open up her home to guests like ourselves because her salary no longer stretches as far as she needs it to to feed her family.

The taxi drivers we met all had their own stories too and offered us an excellent window into what life is like here in the city. All full of life and extremely welcoming, and so often driving their cabs only because there is no work available doing what they do best.

Undoubtedly times are hard here for a lot of people, and it isn’t their fault. Politicians making a mess of the economy means there aren’t enough jobs and has created a currency crisis that puts basic commodities out of reach of people who work for their living. As travellers this all played right into our hands. We got more pesos for our euros and found an excellent place to stay, that maybe wouldn’t have been available if it weren’t for the hard times this place is going through. Where we exploiting the place and the people just by being there?

Existential crisis aside, Buenos Aires really shone for us. When we look back on Buenos Aires we’ll likely talk of the best steak we ever ate, the abundant red wine of exquisite quality (who knew a place exists that offers such a variety of good value wines as our Catalan homeland! No cava though), and the colourful buses that never failed to catch our eyes. The cheese and coffee will likely get a shout out too. As will the 4-1 drubbing River Plate gave San Martin when we went to Estadio Monumental and the fact that we saw a fella in an Everton top on our way to the match. We’ll also have to remember the people, for we really did love you all. Writing this now I feel if I have one regret, it’s that we didn’t take more photos of the people. Lesson learnt for the next place we go.

We really did love every single Porteño we spoke to and learnt so much from them all. There is so much spirit and passion in the city that goes way beyond that found in the many football stadiums dotted around the city. Whether fighting injustices from the past, that will live on long into the future, like las abuelas de plaza de Mayo, or simply going out of their way to make sure you know where you’re going and what to look out for on the way Porteños are good people, honest and strong. Their passions burn like fire yet other people’s mistakes, for now at least, have robbed them of their spark.